Alan Miller, co-director at the New York Salon, a collaborative hub of intellectuals, artists, and more that debate contemporary issues, put forth a quality article on the Belief Blog at CNN today. Miller’s post tackles the all-to-common expression, “I’m spiritual, but not religious.” Miller notes that this refrain is especially common among the younger U.S. population which tends to dismiss anything institutional as inauthentic. This reaction has not been helpful and has created a “spiritual” people lacking doctrinal substance (and I would add true spiritual vitality, orthodoxy, and the like). As far as I know, Miller is not a Christian, but his insights are helpful:

Those in the spiritual-but-not-religious camp are peddling the notion that by being independent – by choosing an “individual relationship” to some concept of “higher power”, energy, oneness or something-or-other – they are in a deeper, more profound relationship than one that is coerced via a large institution like a church.

That attitude fits with the message we are receiving more and more that “feeling” something somehow is more pure and perhaps, more “true” than having to fit in with the doctrine, practices, rules and observations of a formal institution that are handed down to us.

The trouble is that “spiritual but not religious” offers no positive exposition or understanding or explanation of a body of belief or set of principles of any kind.

How has this “spirituality” found its place today? Miller wisely observes,

It is within the context of today’s anti-big, anti-discipline, anti-challenging climate – in combination with a therapeutic turn in which everything can be resolved through addressing my inner existential being – that the spiritual but not religious outlook has flourished.

What has happened as a result? Sin is no longer a rebellion against the living God, but weakness. In “spiritual” circles, sin is not destructive, but a mistake that one can brush past.

Miller concludes his remarks by noting that this spiritual person is not just lacking substance, but is in a sense – a softy: “At the heart of the spiritual but not religious attitude is an unwillingness to take a real position. Influenced by the contribution of modern science, there is a reluctance to advocate a literalist translation of the world.”

Tim Keller’s new book The Meaning of Marriage: Facing the Complexities of Commitment with the Wisdom of God is out today. Christianity Today released an interview between he and Karen Prior that is worth noting. Among the things mentioned, a comment about the relationship between commitment and freedom stood out, as it relates to things beyond marriage. Keller was asked, “Why do you believe that the commitment of marriage is viewed as largely anything but freeing today?” He replied:

If you don’t bind yourself to practice the piano for eight hours a day for ten years, you’ll never know the freedom of being able to sit down and express yourself through playing beautiful music. I don’t have that freedom. It’s very clear that to be able to do so is a freeing thing for people, with the diminishment of choice. And since freedom now is defined as all options, the power of choice, that’s freedom from. I don’t think ancient people saw these things as contradictions, but modern people do. 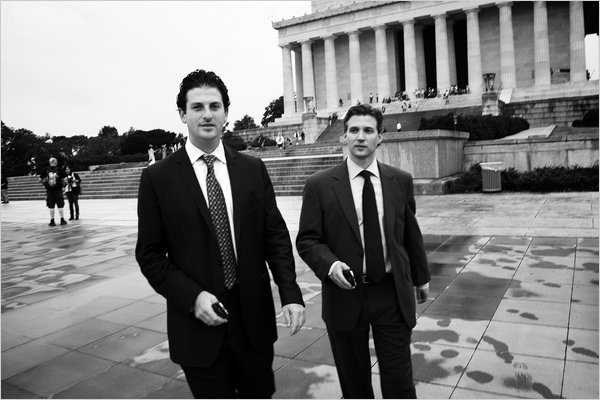 Picture: Michele Asselin for The New York TimesThe New York Times recently published an article following two men who are using social media and telecommunication technology to change the way diplomacy is done. The article tracks the lives and ideas of Alex Ross and Jared Cohen, both of which are State Department employees. Here’s an excerpt of some of their developments:

It is fair to say that Ross and Cohen are obsessed with mobile phones; they speak at length about telemedicine, tele-education and something called telejustice (the details of which they haven’t quite worked out yet). At an early-morning meeting in Palo Alto with mobile-banking experts, they looked for ways to expand a successful pilot program used to pay policemen via mobile phones in Afghanistan to another conflict zone in Congo. In both cases, as truckloads or planeloads of cash meant to pay policemen dwindled on their way from the capital cities to the provinces, so did the chances for lawful governance. Mobile banking is well established in places like Kenya, and cellphones are ubiquitous worldwide, even in poorly developed regions. Here was a way to use technology to address diplomacy, development and security concerns at once: direct payments to officers’ phones, which would be transferable to the phones of their distant families, could become a powerful tool for stability, even in Congo. Or at least that was the hope.

David Brooks, Op-Ed for the New York Times, recently wrote on the effectiveness of mediums for student learning – namely the internet vs. books. Brooks dinstinguishes the two,

The great essayist Joseph Epstein once distinguished between being well informed, being hip and being cultivated. The Internet helps you become well informed — knowledgeable about current events, the latest controversies and important trends. The Internet also helps you become hip — to learn about what’s going on, as Epstein writes, “in those lively waters outside the boring mainstream.”

But the literary world is still better at helping you become cultivated, mastering significant things of lasting importance. To learn these sorts of things, you have to defer to greater minds than your own. You have to take the time to immerse yourself in a great writer’s world. You have to respect the authority of the teacher.

Right now, the literary world is better at encouraging this kind of identity. The Internet culture may produce better conversationalists, but the literary culture still produces better students.